What are the dangers that threaten American journalists?

journalists were physically attacked in the second half of 2017

Journalists who report abroad are often in physical danger but those who report in the U.S. are also at risk of physical violence and even jail time for their in-country reporting. All this while their work is discredited on a daily basis by the man with the loudest megaphone in the country, and possibly the world.

Stephanie Keith is a freelance photojournalist based in Brooklyn, NY. She’s covered conflict in the U.S. for 11 years including Standing Rock, the 2014 riots in Ferguson, MO, and the Unite the Right rally in Charlottesville, VA, last August. She was arrested while covering an Occupy Wall Street protest in 2011.

“After I got arrested I felt like I missed a lot of photos because I didn’t want to be anywhere near police officers,” says Keith. The journalist says she’s also been knocked down and thrown against a wall by police.

After I got arrested I felt like I missed a lot of photos because I didn’t want to be anywhere near police officers.

In 2017, nine journalists were arrested while covering inauguration protests in Washington, D.C. Freelance journalist Aaron Cantú is the only one who has not had his charges dropped. He currently faces up to 75 years in prison.

Cantú was originally charged with one count of rioting — a felony — but on April 27, 2017, a grand jury indicted him on eight separate felony counts. The charges include inciting a riot, rioting, conspiracy to riot, and five counts of destruction of property, alleging that the journalist “gathered with others,” “wore dark clothing,” and “moved with the group.” In a motion to dismiss, Cantú’s lawyers argued these actions were integral to the journalist’s work documenting the protests. They compare these tactics to those of a journalist embedded with the military. Cantú’s hearing is scheduled for October 15, 2018.

In 2006 and 2007, Josh Wolf served 266 days over two sentences— the longest stint in prison any journalist has served in the U.S. — for refusing to turn his footage of a protest over to authorities. The prosecutors soliciting the footage thought it could reveal the identities of the people who assaulted a police officer during the demonstration. Wolf believed it was his ethical duty to protect the people he considered his sources.

Prior to Wolf’s time spent in a federal prison in Dublin, CA, Vanessa Leggett held the record for number of days a journalist in the U.S. has spent behind bars on a sentence related to her work. Leggett investigated a murder-for-hire case for a true crime book she’d planned to write. She was sentenced to serve time in a Texas prison when she refused to disclose her sources and research to a federal grand jury.

Journalists face conflict with the people they report on, too.

“Harassment of journalists has included death threats and threats of sexual and other physical violence,” says Rick Blum, director of News Media for Open Government. “Taken together, it is clear that not only is the role of the news media in our democracy under attack, but the safety of individual journalists is threatened.”

Tori Marlan was a staff writer for the Chicago Reader when Eugene Hawes called the paper making death threats that named the journalist specifically. Marlan had written a story about Hawes, a police informant, giving false information to officials.  His lies landed his cousin, who was eventually acquitted, in prison on murder charges. The publication advised her to report the incident to the police, who told Marlan they couldn’t do anything.

“I took down my name above the buzzer of my apartment building,” says Marlan, who works from home and feared for her safety after the call.

On August 2, 2007, editor-in-chief of the Oakland Post Chauncey Wendell Bailey Jr. was shot and killed in Oakland, CA. Bailey had written multiple articles that uncovered the problems of Your Black Muslim Bakery and at the time of his death was investigating the bakery’s finances, just as the business was filing for bankruptcy. The man who shot Bailey from a van that pulled up beside him on his walk to work was a hitman hired by the Bakery’s CEO.

In yet another example, journalists at a White Plains, NY paper were targeted after a controversial story appeared in the Journal News. The outlet published a controversial map on their website that identified pistol permit holders in Westchester and Rockland counties. The map included permit holders’ names and addresses and was taken down after a slew of threats targeted journalists at the publication.

Information about where Journal News employee’s children attended school was published online and some reporters received messages saying they would be shot on the way to their cars. Two packages of white power were sent to the newsroom and a third was sent to a reporter’s home (the powder was eventually tested and ruled harmless). The paper’s Rockland editor at the time, Caryn A. McBride, hired armed guards to patrol its headquarters. 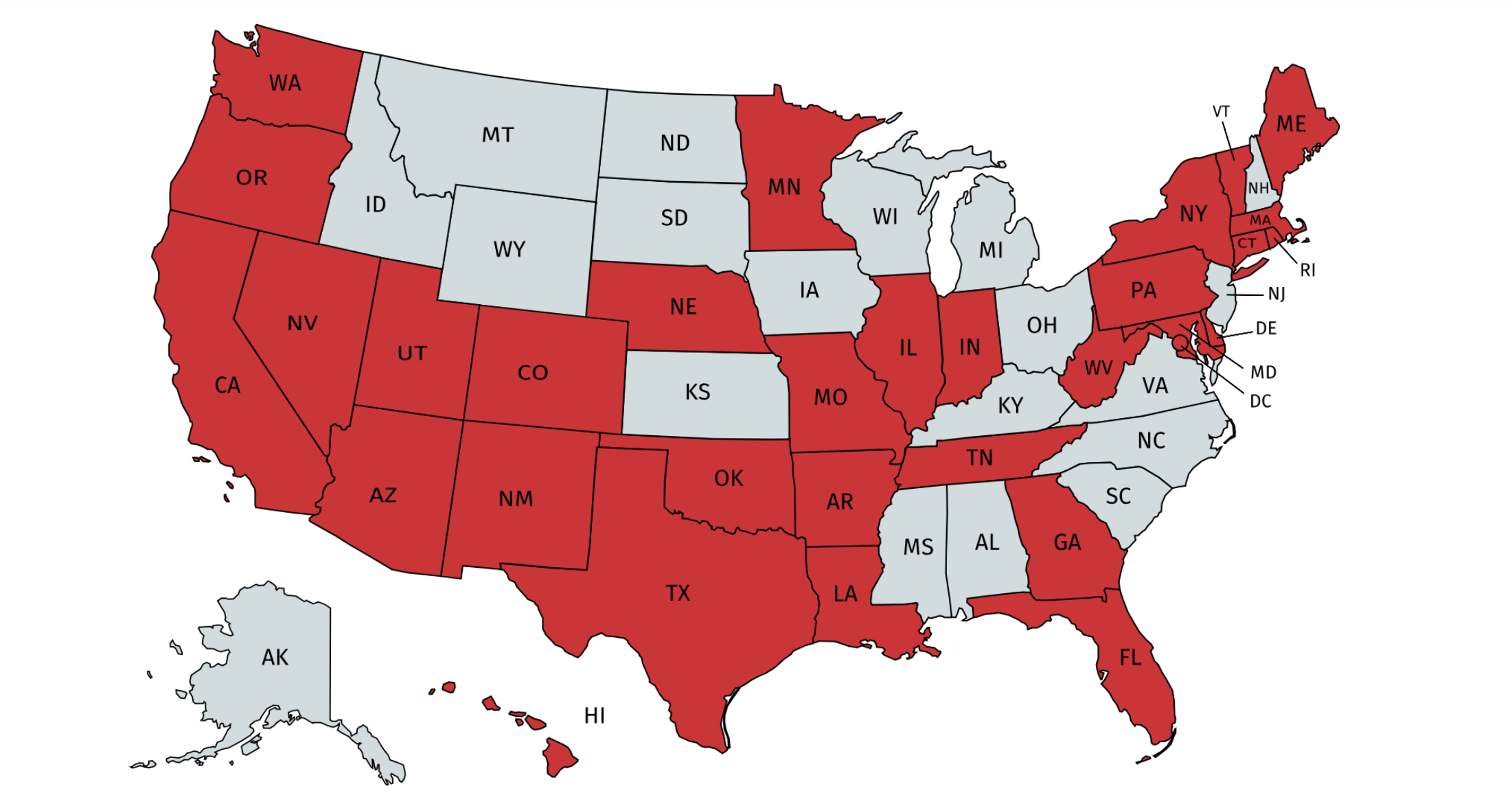 The press is held accountable for what they publish and when false statements are made, the journalists and publications behind those statements should not be let off the hook. An issue arises, however, when frivolous lawsuits against the media are used as means to silence bad press.

Slapping news outlets with lawsuits, even if they have a weak basis, is an intimidation strategy used by wealthy individuals and companies to keep information out of the American press. Some go after individual journalists, many of whom cannot foot the legal bills.

“Even if it’s not ultimately successful it can affect the people’s job or create this chilling effect where journalists will worry about it in future situations and maybe they won’t write a story in the future,” says Trevor Timm, Executive Director of the Freedom of the Press Foundation.

In recent years, Silicon Valley billionaire Peter Thiel famously financed Terry Bollea a.k.a. Hulk Hogan’s takedown of Gawker. In 2007, the website had publicly outed Thiel. He later disclosed this as his motive behind secretly financing Bollea’s lawsuit. The lawsuit was over clips of a sex tape involving the wrestler and a friend’s wife that appeared on Gawker.

Another billionaire, Frank VanderSloot, CEO of Melaleuca, Inc. and a former national finance co-chair for Mitt Romney’s presidential campaigns, has filed lawsuits against multiple news outlets as well as at least three individual journalists since 2012.

VanderSloot sued the investigative news outlet Mother Jones and two of its journalists — one for a tweet she published promoting an article about VanderSloot — over an article the outlet published in February 2012. He also targeted the now Portland-based journalist Peter Zuckerman with ads that discredited the journalist’s work.

The article noted the lengths VanderSloot went to oppose gay rights in Idaho, as well as his $1 million contribution to Mitt Romney’s Super-PAC. Mother Jones issued three minor corrections in response to a complaint from VanderSloot’s attorney. The ordeal was settled.

Later that year, the outlet published a video of then presidential candidate Mitt Romney’s controversial comments during a private fundraiser. After that, VanderSloot sued Mother Jones for defamation. VanderSloot lost the case but still, Mother Jones ended up spending millions of dollars fighting the case and was even dropped by their libel insurance company following their victory.

A journalist at the Idaho Falls Post Register, Zuckerman won multiple awards for a series that reported that both the Boy Scouts of America and Mormon Church leaders had failed to prevent a pedophile from working in a Boy Scout camp.

VanderSloot is a member of the Church of Jesus Christ of Latter-day Saints, the Mormon church linked to Zuckerman’s investigation. In an attempt to discredit the exposé, VanderSloot’s company took out a full page ad in the Post Register. The ad identified Zuckerman as gay and stated that, “for whatever reason, Zuckerman chose to weave a story that unfairly, and without merit, paints Scout leaders and church leaders to appear unscrupulous, and blame them for the molestation of little children.”

Currently, 31 states plus Washington D.C. and Guam have enacted laws aimed at protecting the media from strategic lawsuits that use legal defense costs as a tool to silence critics. Typically, SLAPP plaintiffs do not expect to win, but rather bleed a publication or journalist of money until they agree to settle. According to the Reporters Committee for Freedom of the Press, California, Illinois, Louisiana, Oregon, Rhode Island, Texas, Vermont and Washington enforce the strongest anti-SLAPP laws.

THE GOVERNMENT’S STANCE ON JOURNALIST PROTECTIONS

While President Trump has made habit of publicly discrediting the media, his predecessor took a quieter approach to silence leakers of government information.

In its eight-year run, the Obama administration prosecuted nine cases identifying government whistle-blowers — three times the total number of cases in all previous administrations combined. The most famous case was that of Edward Snowden leaking classified NSA documents to three journalists who used them to break a story about government surveillance.

On the campaign trail, Donald Trump famously attempted to discredit CNN, The Washington Post, Morning Joe and The New York Times, among other news outlets. The trend continues into his presidency.

On May 9, 2018, he fired a tweet from his personal account. It was the first of two tweets that day alone that would make accusations of fake news. The president calls any network or newspaper that portrayed him in a negative light “fake.” 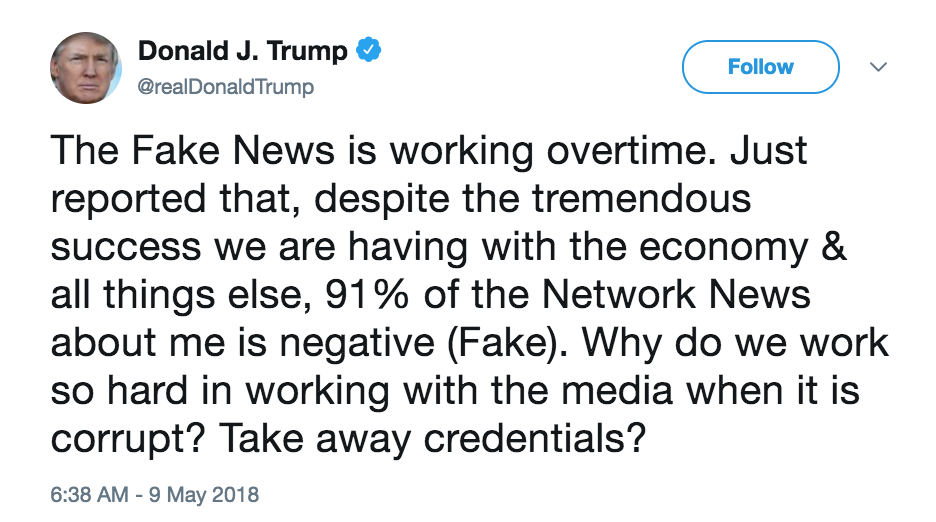 “Part of me thinks that his insults to the press can backfire, that they make the press more aggressive towards his administration,” says Timm. “It’s brought out some good adversarial reporting.”

In February 2018, Congressman Eric Swalwell, D-CA, introduced the Journalist Protection Act, citing the current administration’s attitude toward the press as a driving force behind the bill. The Journalist Protection Act would make it a federal crime to intentionally cause bodily injury to a journalist during the course of reporting in an effort to intimidate or impede him or her from newsgathering for a news organization.

“Not all attacks on journalists this year have been committed by Trump supporters, but the fact remains that rhetoric emanating from the world’s most powerful office is stoking an environment in which these attacks proliferate,” said Swalwell in a press release. “We must send a loud, clear message that such violence won’t be tolerated.”

“A lot of state laws are outdated and some do not apply to the Internet and it’s unclear if they apply to independent journalists,” says Timm of the Freedom of the Press Foundation.

Timm does not, however, see the president’s threats to rewrite libel laws as viable. Time says that for the president to make good on his threats would require changing the First Amendment, an ambition that is next to impossible.