War correspondents are nearly as prone to PTSD as combat veterans — that’s according to study published in the Journal of the Royal Society of Medicine. The frontline exposure and the risks they take to tell stories of conflict put them at a daily risk of trauma. This photo essay follows the diverse experiences of a group of photojournalists working in different hostile environments around the world. 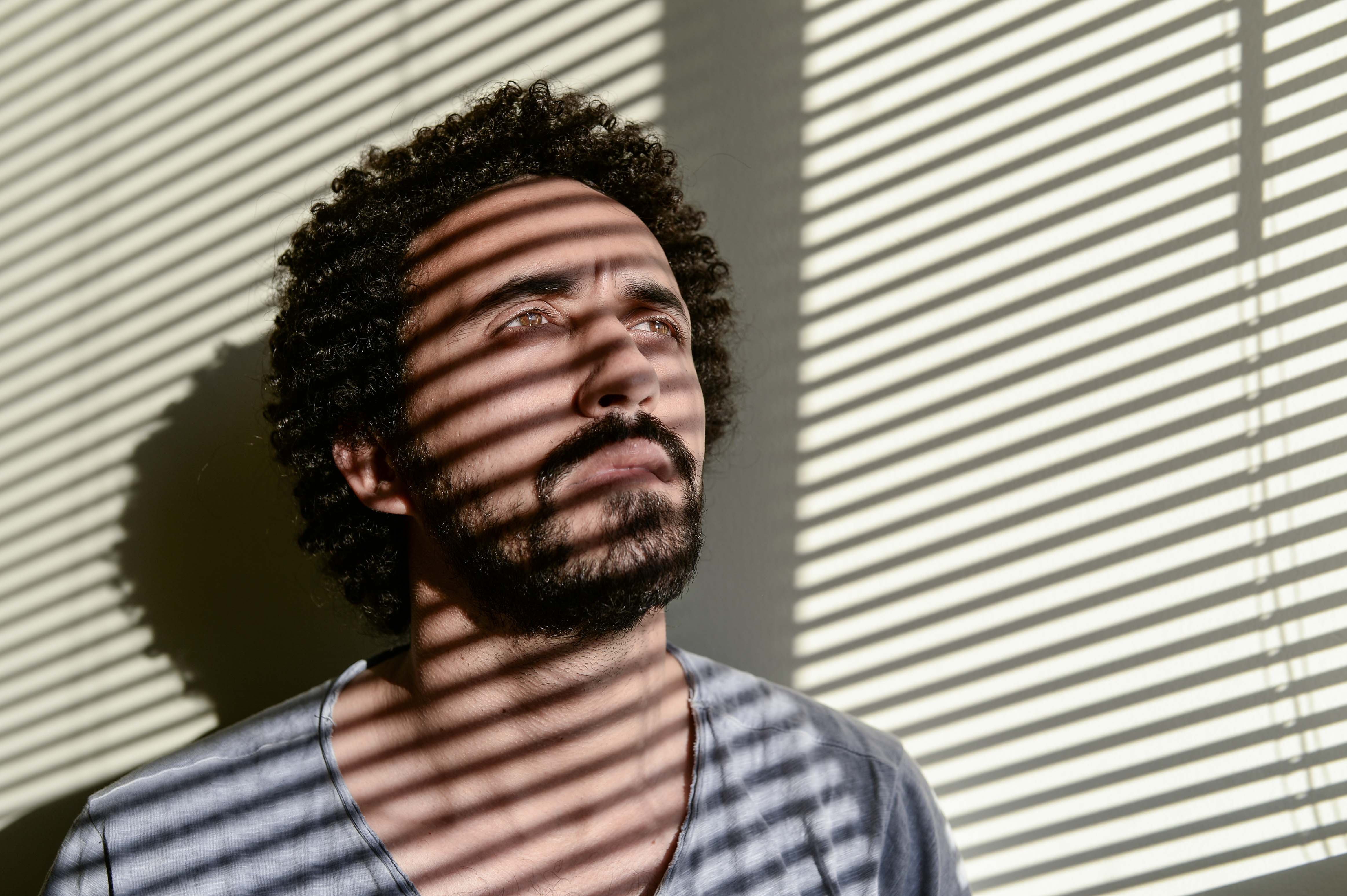 Mostafa Bassim poses for a photograph in his residence in Alexandria, V.a. April 29, 2018. Amr Alfiky for NYCity News Service. 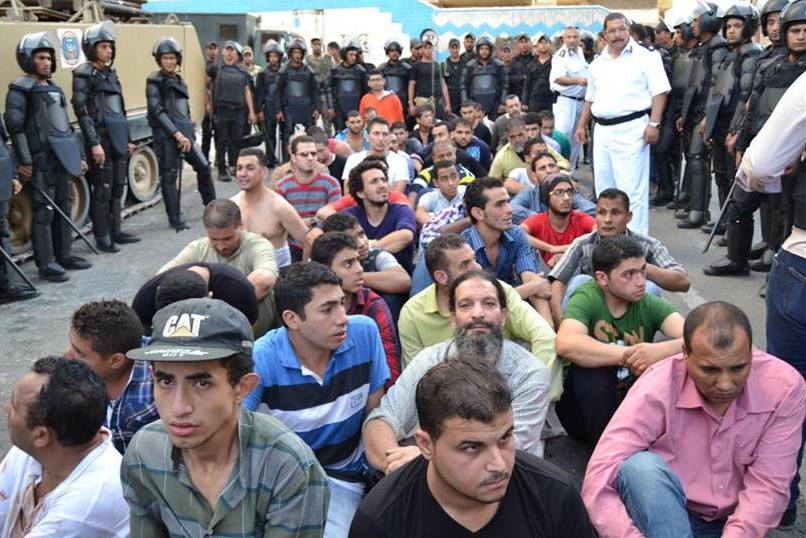 Mostafa Bassim, in a purple shirt, (fifth in second row to the left) is seen detained by Central Security Forces in Egypt. Photo: Egyptian Ministry of Interior (via) Facebook.

Mostafa Bassim: “In November 2013, while covering a protest in my capacity as a photojournalist, I was beaten by police, thrown into a police truck, taken to police station, tortured, and held in custody for three days. My equipment and personal belonging were confiscated and never returned,” says Egyptian photojournalist, Mostafa Bassim, 28. “Shortly after I arrived in the U.S. in April last year, to attend The New York Times Portfolio Review, the newspaper I worked for in Egypt who solely supported military rule, fabricated a case against me. I couldn’t return home since then.” Mr. Bassim, now exiled for almost a year, lives in Washington D.C. and is in the process of applying for asylum while working at a restaurant in Virginia. 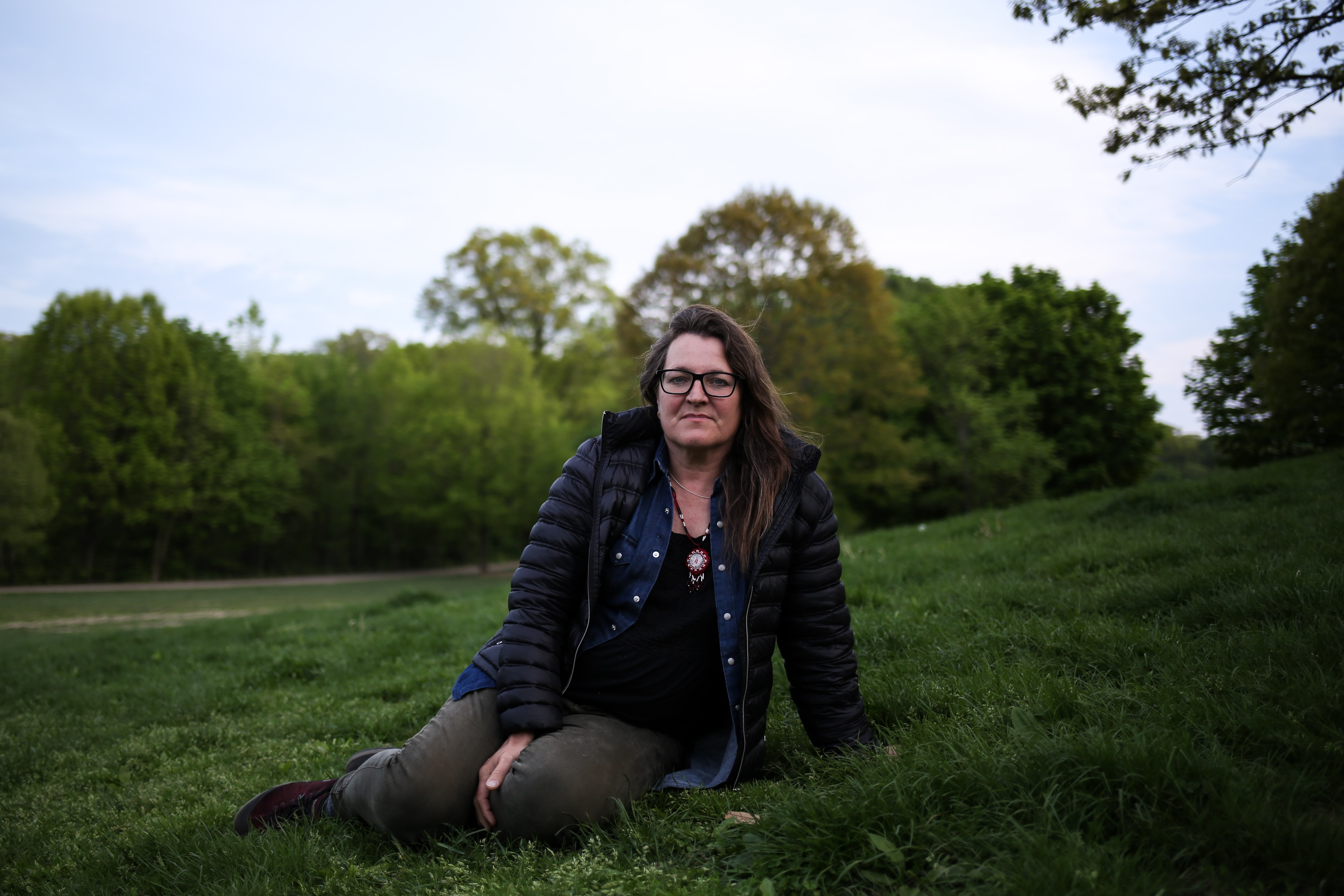 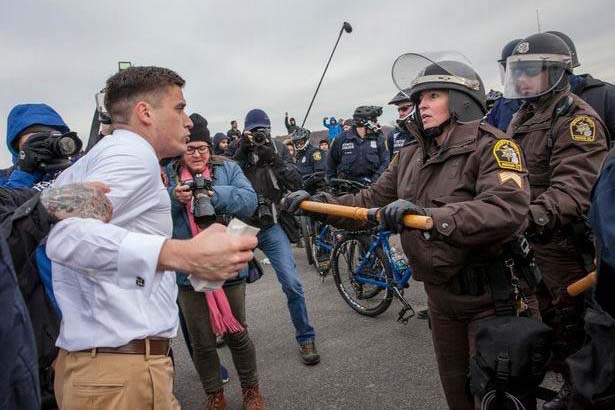 Stephanie Keith, with a pink scarf, is seen covering the violence at a Richard Spencer speech in Michigan, U.S. Photo: Cory Morse (via) Facebook.

Stephanie Keith: “One of the biggest tolls of covering the conflicts is the emotional toll, witnessing these things. I remember photographing at Standing Rock and you see all the Native Americans and they’re all believing that they’re doing something good, and they are, and there is the police tear gassing. It was sad so many times and I cried so much. I’d be photographing the conflict between the Native Americans and the police and I’d be crying.” -says American journalist, Stephanie Keith.  “I got arrested once by the police when I was covering the Occupy Wall Street protests and other times the police would knock me down and one threw me against the wall for doing nothing but standing there with a camera. I got really scared of the police and I began becoming nervous around them and I still am. I had to get in there to get the arrest pictures but I’m scared of them now. After I got arrested I felt like I missed a lot of photos because I didn’t want to be anywhere near police officers.” Ms. Keith now lives in Brooklyn, N.Y. and has been a photojournalist for 11 years covering conflict in the U.S. including Standing Rock, Ferguson and the latest Charlottesville events. 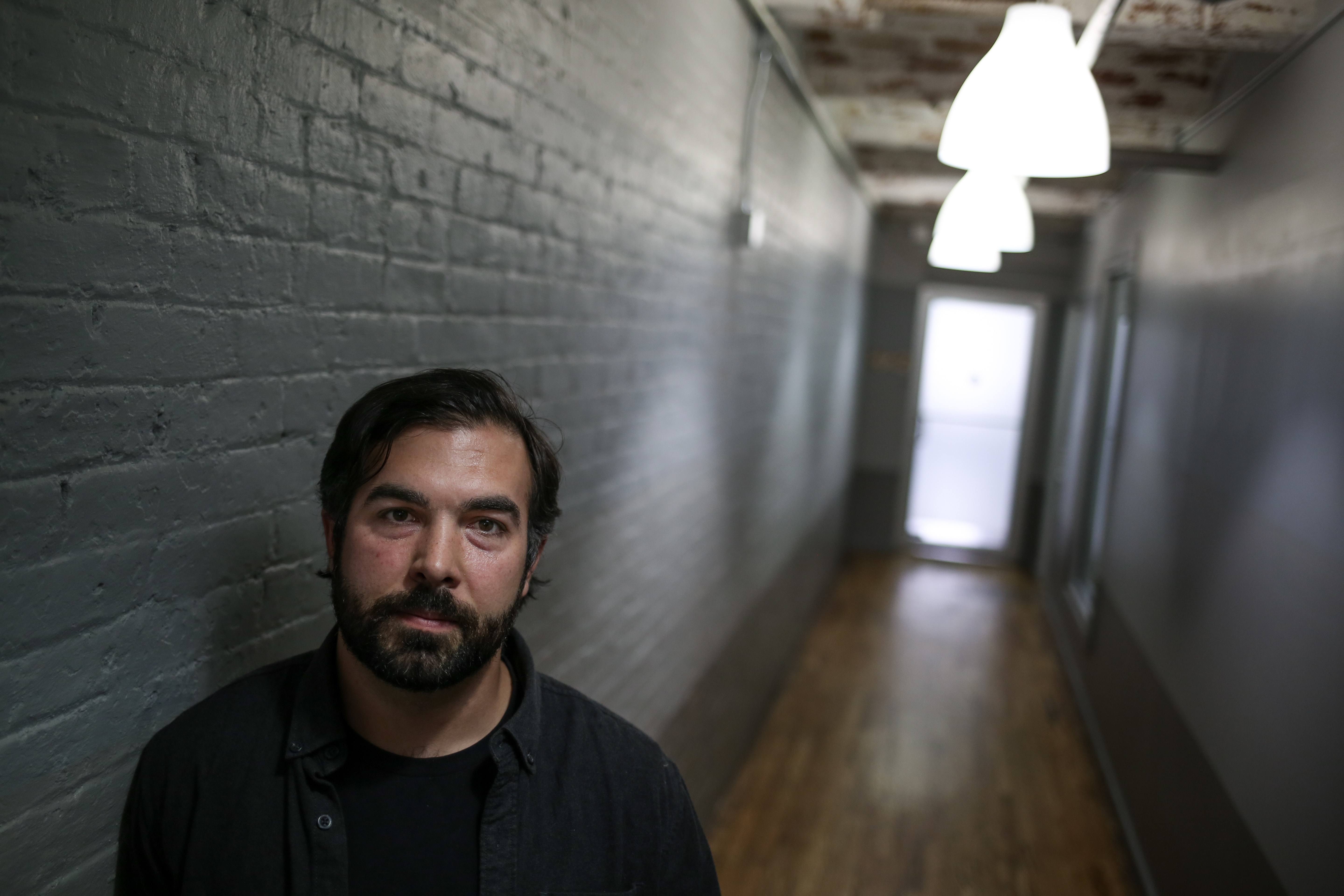 Cengiz Yar poses for a photograph outside of his office in Dumbo, Brooklyn, N.Y. May 11, 2018. Amr Alfiky for NYCity News Service. 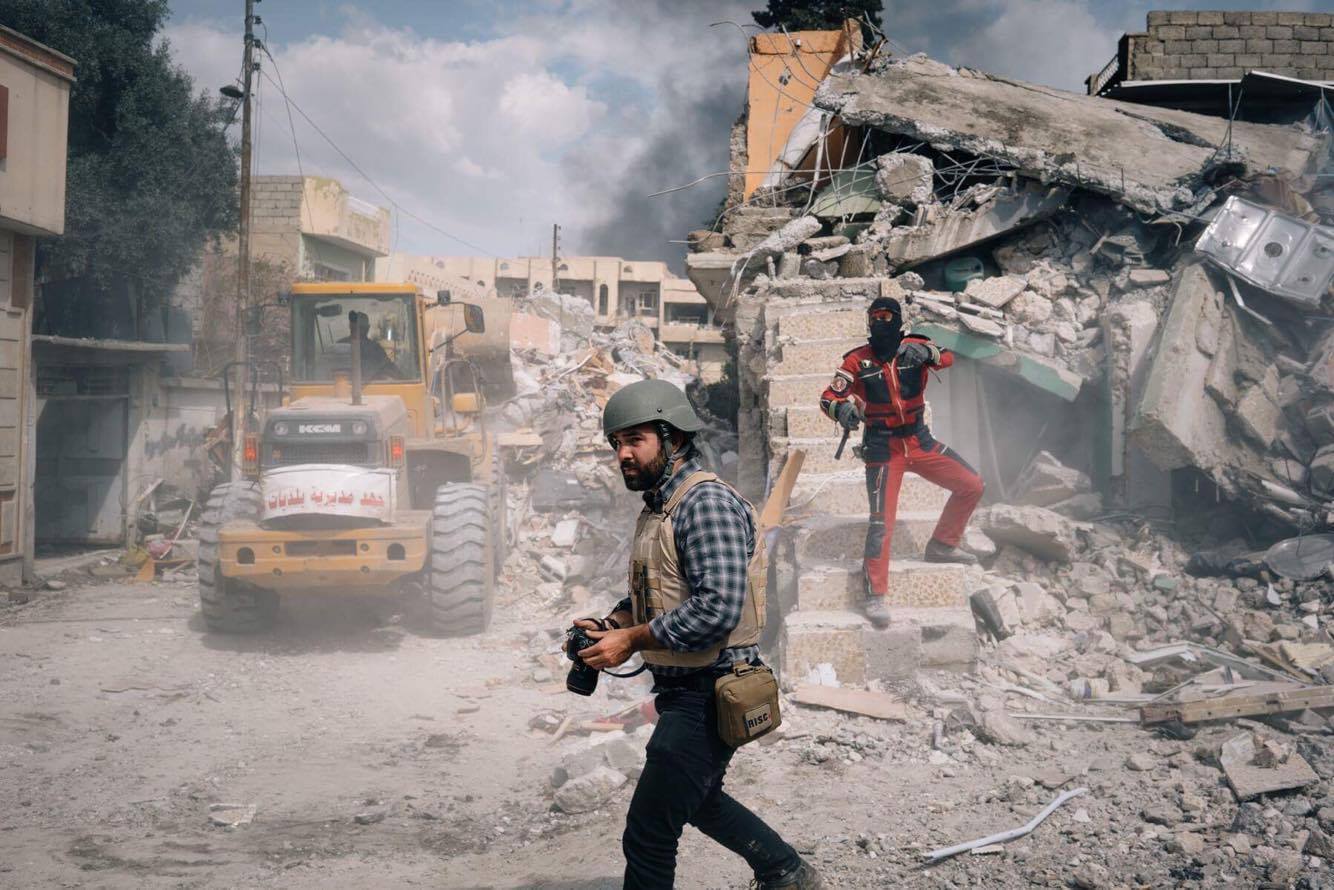 Cengiz Yar is seen while covering the aftermath of the battle for Mosul between the Iraqi Army and ISIS in Iraq. Photo: Alice Martins –Courtesy of Cengiz Yar.

Cengiz Yar: “I’ve changed a lot personally. I see the world differently than I did five years ago. It’s a whole lot sadder knowing that people die every day and that nobody cares and the struggle of trying to convince people of what’s happening and people still not showing compassion or not empathizing and you’ve been trying to tell them. I have not been able to rationalize it now. In terms of mental health, I think it’s one of the least focused and talked about things. It has been getting a lot of attention now, which is great. I’m lucky because I have a lot of friends and a partner who take care of me but it’s really important for journalists to take care of themselves.” –says American journalist, Cengiz Yar, 32. “It’s brought me a whole lot closer to a lot of people. I’ve made some really good friends in the field and out of the field. People you work with and you go through extreme situations with and you bond over that. I can’t talk about some things I’ve seen but I can talk about it with one person that was with me that day. What is also unique is that these experiences that I’ve seen have made me relate to people back home in a way that I didn’t think I could relate to them before.” Mr. Yar is a Brooklyn-based photojournalist who has covered the Middle East extensively including the battle for Mosul and the war in Syria. 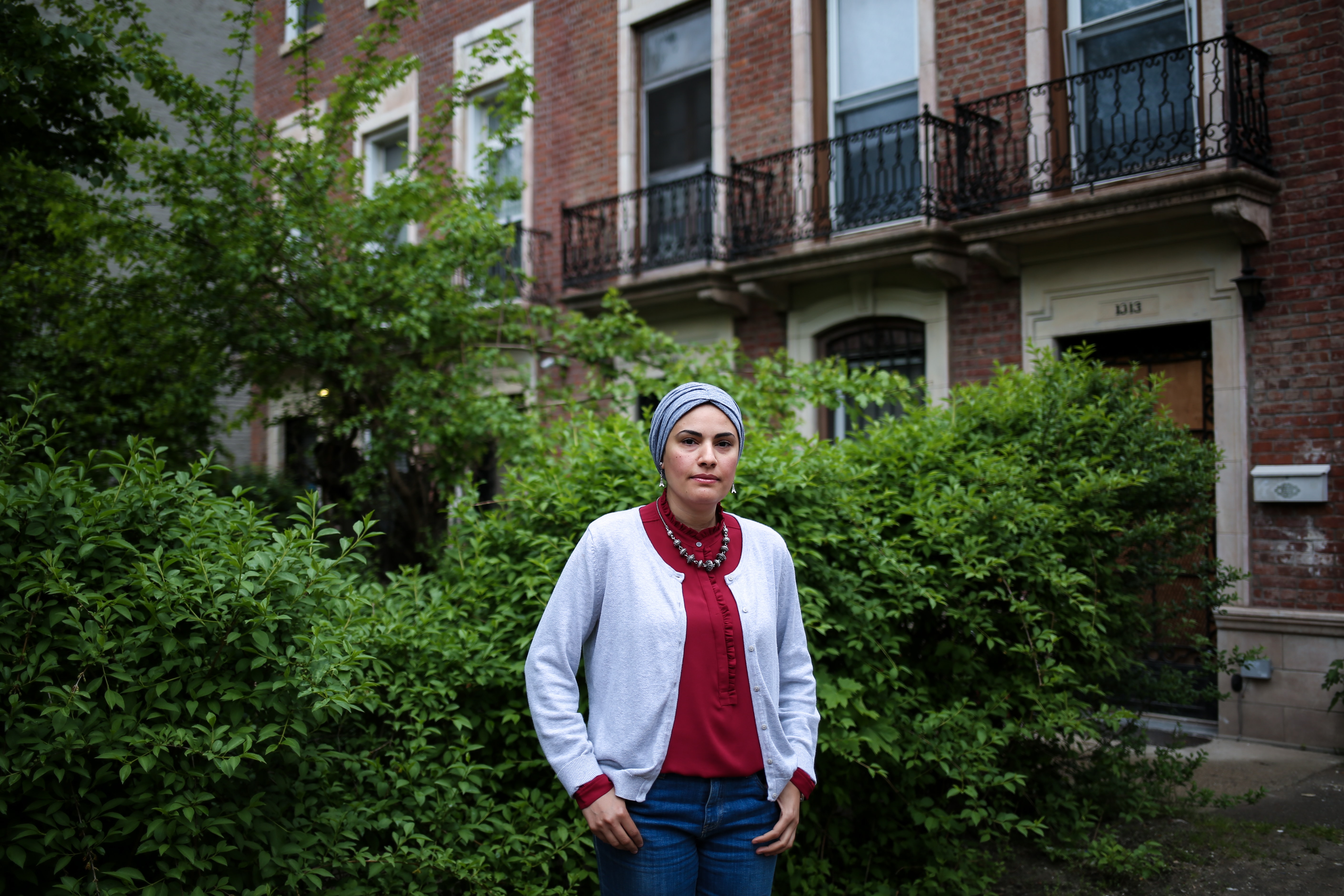 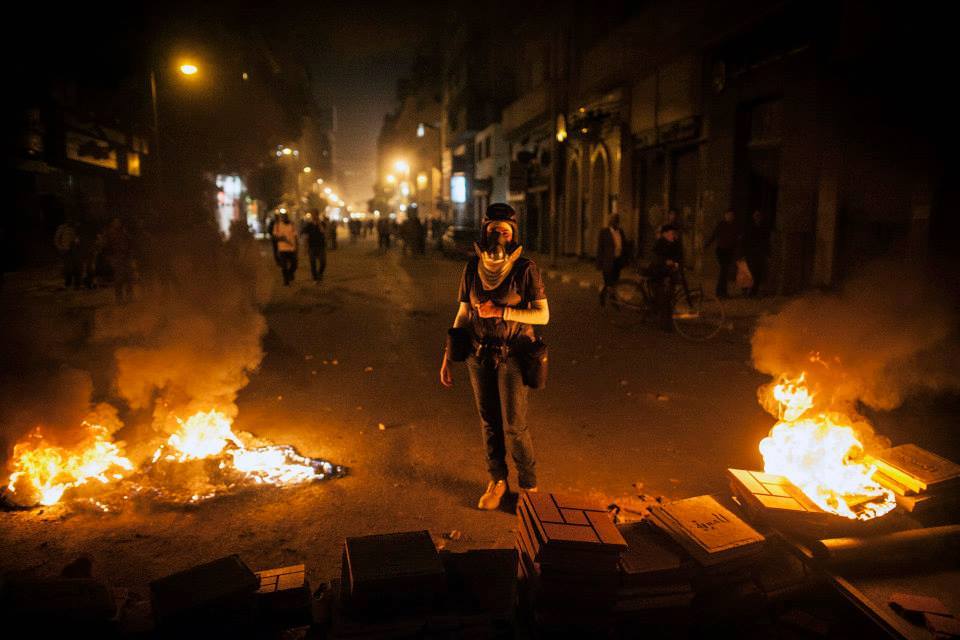 Eman Helal: “The first time I traveled outside of Egypt to cover an event for the newspaper was in 2010, 2011 when I covered the North and South Sudan split. I was nervous to go but wanted to prove myself capable of a large event. When I arrived at the airport, the journalist responsible of picking me up was not there. When I eventually reached the airport, I found him drunk and he assaulted me. I was terrified and did not talk about what happened because I was the first woman journalist from the newspaper who traveled outside of Egypt and was worried that if they knew what would happen, they would not let me travel again. I was also in shock at the situation since this is the first time it has ever happened to me and I did not know what to do and who to tell and if I would find support, especially knowing the power this journalist had.” -writes Egyptian journalist, Eman Helal, 33. Ms. Helal is based in Cairo, Egypt where she covered the Egyptian Revolution for local and international news outlets 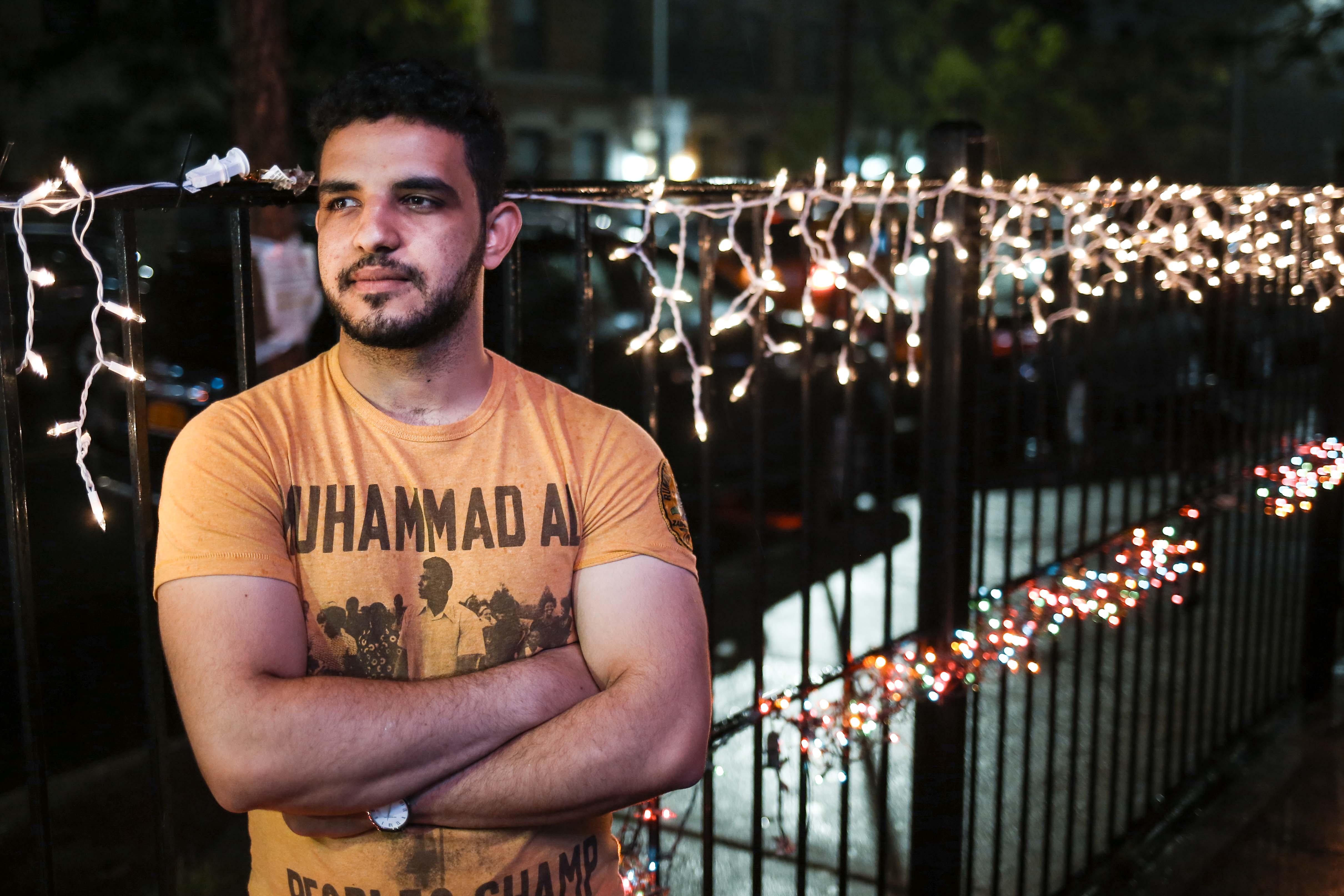 Mohammed Elshamy poses for a photograph in Astoria, N.Y. May 17, 2018. Amr Alfiky for NYCity News Service. 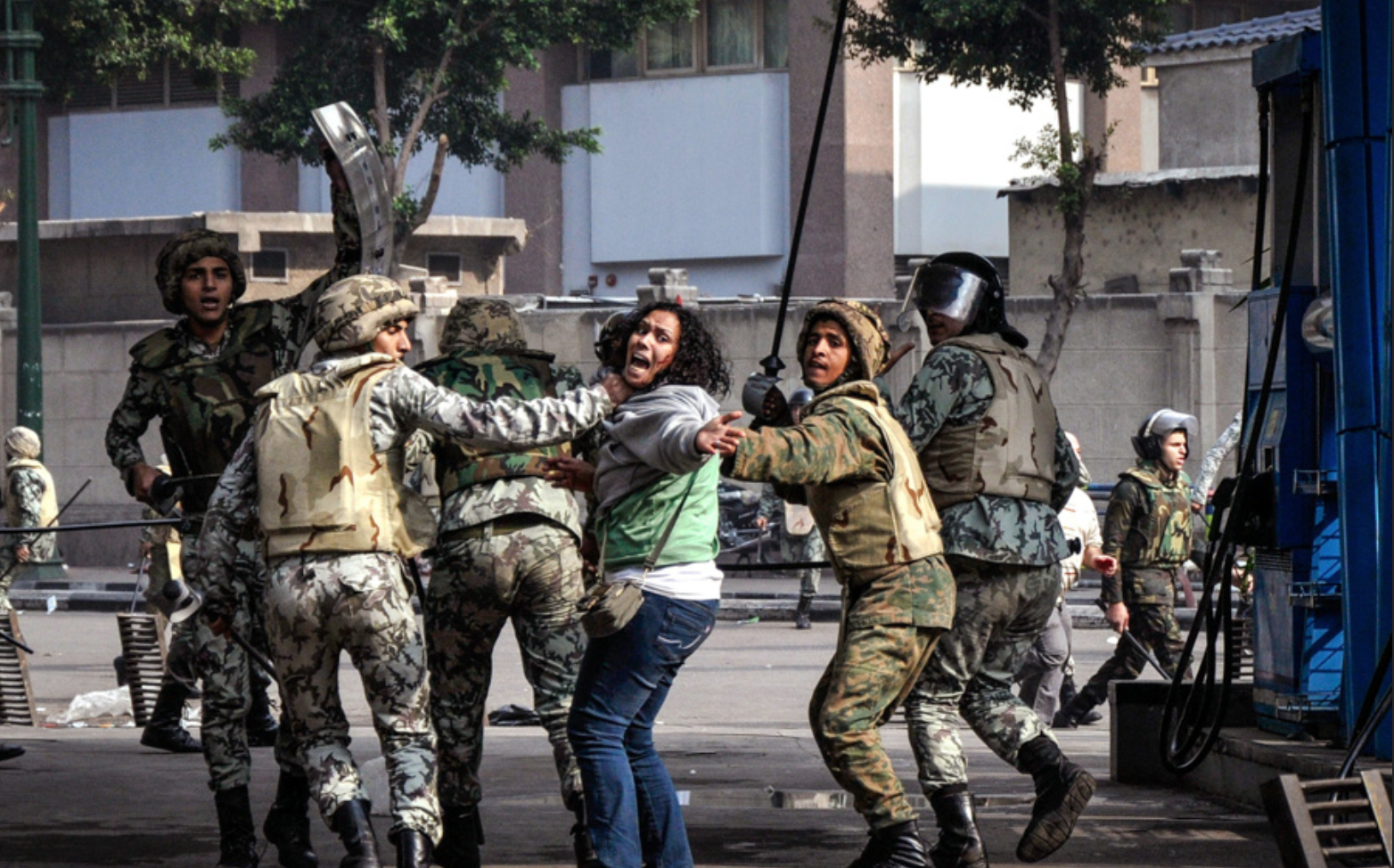 A woman in being detained by Egyptian military in Cairo, Egypt 2012. Photo: Mohammed Elshamy. 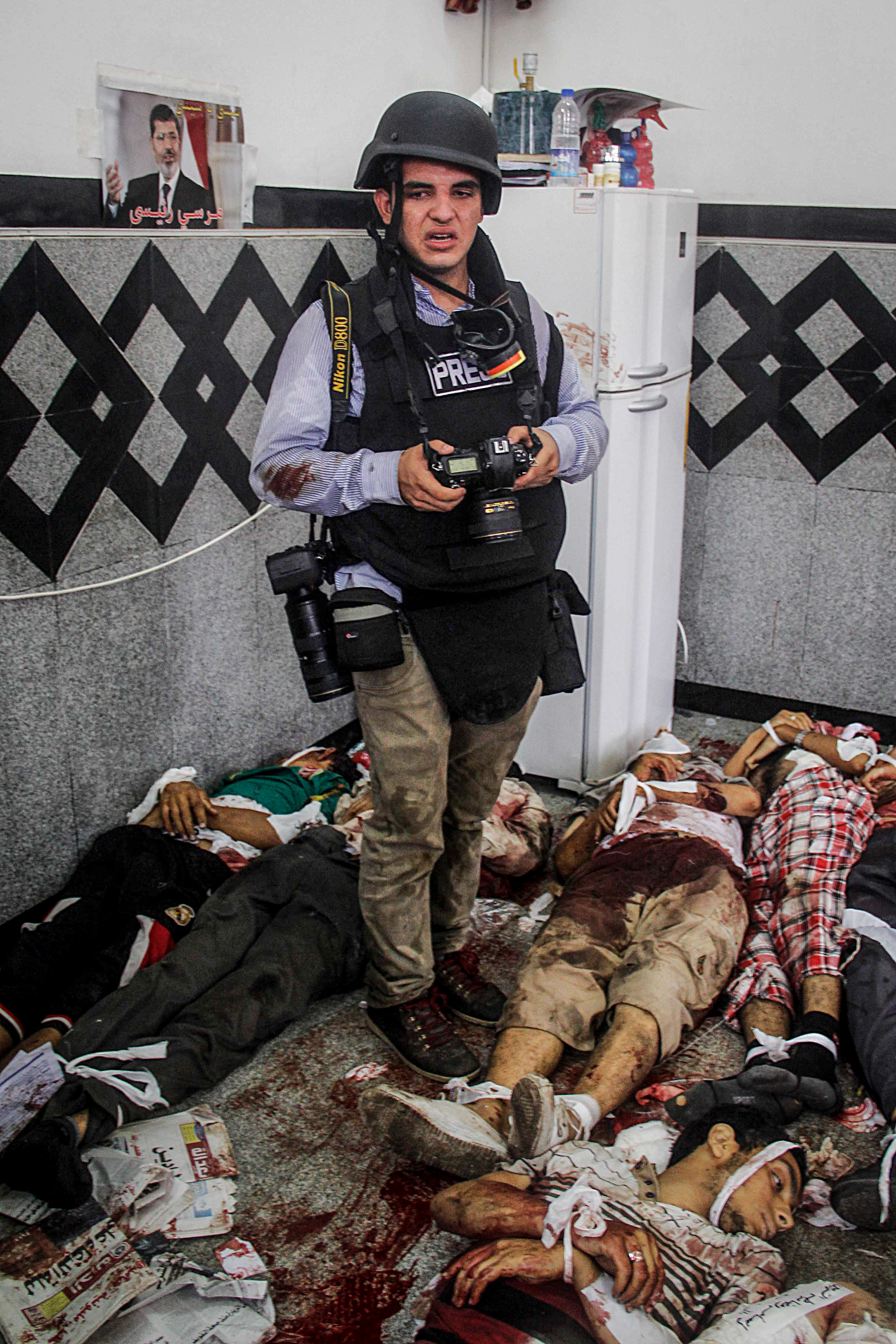 Mohammed Elshamy: “On August 14, 2013, I covered the violent dispersal of the anti-military coup protesters in Rabbia Adawiya Square.  I documented several political events in Egypt at that time, including street clashes and elections, but it was the bloody military coup of 2013 that changed my life.  As an Egyptian, witnessing people demanding liberty and democracy gave me hope for a better world. The resistance and uprising against the 30-year autocracy, and the fight for a better country, was a turning point for the Egyptian people, and for me. Unfortunately, our hopes were crushed when the government began to crack down on the protests. I documented the brutality of the military police and witnessed hundreds of peaceful protestors being killed.  The sweeping mass arrests included my older brother, Abdullah Elshamy, an Al Jazeera reporter. He spent 11 months in a high security prison in Cairo before getting released in June of 2014. On January 28, 2014, I was arrested while documenting the violent uprisings in Egypt and was forced to leave my country to avoid prosecution,” says Egyptian journalist, Mohammed Elshamy, 24. Mr. Elshamy covered other major international conflicts including the refugee crisis in Europe and the Ebola outbreak in Africa. A staff photographer at Anadolu Agency and a student at the International Center of Photography School, he is based in Brooklyn, N.Y.